Our family has been living in Vermont year-round for years.  We love the snowy winters with skiing and snowshoeing and the autumn foliage brilliance.  But nothing beats a good night of fireworks and an Independence Day parade!  This year was no exception.  Even though rain threatened the Burlington fireworks on July 3, we got lucky and the rain cleared in time for a great show seen from the shores of Lake Champlain.

July 4th found us in Warren, Vermont.  Warren knows how to put on a great American home-town parade. (Website)   The sun has rarely failed to shine on the thousands who descend on this quiet community, tripling its size of 1700 up to approximately 6000!  Warren is the only town in the Mad River Valley region with a Main Street that can be closed off to accommodate a parade.  As soon as you walk into town you’re greeting by friendly volunteers selling Buddy Badges –  clever fundraising.    The parade started a short time after its appointed hour when the fire trucks lead the way and floats and marchers toss candy to the kids lining the parade route. And once the parade is over the town and its guests gather in front of the Warren Store to dance and celebrate to live music. 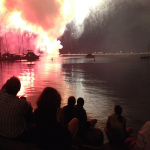 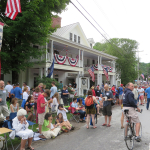 Waiting for the Parade 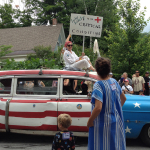 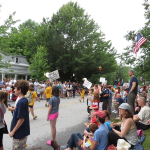